As a child, I spent a lot of time talking to myself. When a ventriloquist came on television, I would go right up close to see how it was done. I practised in front of a mirror and satisfied myself that I could do it as well as the professionals. Then I stopped.

It was in 2008 that I started practising again in order to perform at the Britannia Panopticon Music Hall. My first routine featured me attempting to wow the audience in a talent show as the handler of "Fernando the Amazing Talking Parrot". Over the years, Fernando has become more of a showman in his own right, demonstrating psychic mediumship and stage magic (with me as his assistant) as well as singing the occasional duet. In 2010, we opened for the band EELS on their Scottish tour dates. We were later interviewed by Janice Forsyth for BBC Radio Scotland's Comedy Café and called upon to present an edition of the Comedy Zone. 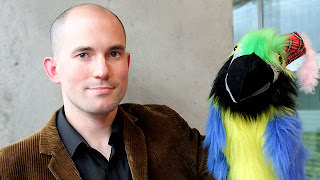 Fernando has his own website, facebook page and twitter account, which he is very bad at updating. We are currently (intermittently) developing a collection of pirate-based routines for audiences of varying ages and sensibilities. Some of our earlier routines have been captured on video and can be watched below.


For the right audience (and the right money) I can also be persuaded to perform with a different stage partner. Pam made her début with my burlesque alter ego Dickie Clifford in the routine below. She also has many hidden talents. Despite her name, Polythene Pam is actually made of vinyl.