This weekend is one of horror and dread.

Specifically, I will be conducting another horror walk for Spirit of Glasgow on Saturday, meeting in the Cathedral precinct at 7pm and back for 8pm (there may be space for a few more at a cost of £12 per head). 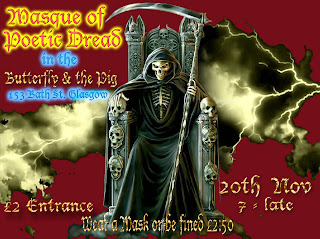 "On Sunday 20th November in the year of 2011, the damned shall be summoned to plead for their souls in verse.  Sheriff Dreadful will open the doors of Grim Reality's townhouse the Butterfly & Pig, and demand the accused state their case in the only acceptable way: poetry. A fee of £2 will be defrayed against the costs of production of the Book of the Dread.

Every one of those Summonsed must wear a Mask to hide their hideousness from the Sheriff, his staff and Grim Reality. Any offender who ignores this requirement will be held in contempt of Court and will receive a summary fine of £2:50.

Grim Reality will oversee the trials of these damned souls as they read for their freedom, as they use words to keep the doors of hell closed, to keep the Reaper at bay.

All those deemed to have passed the examination and considered worthy will be entered into the Book of the Dread."

My own personal dread is of failing to assemble adequate words and raiment.