Long time, no post (again). In my defence, getting my 1 apology in first, I've not been on top form physically and have been busy with all sorts of things on the domestic, political and academic fronts. Which makes my 3 prizes both surprising and especially gratifying.

It started on Monday 18 May with the annual Words & Music at Sammy Dow's Mayfest poetry competition. After several occasions as runner-up, I finally got my name added to the Hugh Healy Trophy. (The venue has now become Lebowski's — more on this later.) 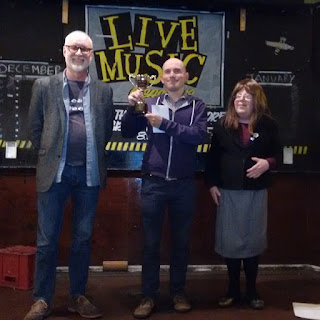 Next up was the Faith and Unbelief poetry slam (sponsored by Hillhead Baptist Church) as part of the West End Festival on Saturday 27 June. No photographs were taken of this event so I reproduce the winning poem below.

Jimmy Savile took my virginity.
It was 1979.  I was five years old.
But my hopes were big and my hand was bold
when I wrote to that white-haired divinity.
I worshipped this being with his benevolent banter.
There was nothing that couldn't be fixed by Jim.
My prose was a prayer to be heard by Him
who was up there with Jesus and Santa.

It was my first proper letter on Basildon Bond.
I waited two years for the man to respond
and to wave his cigar like a fat magic wand.

I was faithful and fond for this fantasy father.
Switched on to his presence, I clung to the dream
that my clumsy request would be read out on screen
and that, somehow or other,
I would see myself instantly there on the telly,
with my best friend Luke, having been granted – for one day –
superhero powers, which we used in our play
to turn hard men to jelly.

I waited two years for the man to respond:
the Superman mantle would never be donned.
I grew wise – but not quite to how much I'd been conned.

Back then, I was blond, small and innocent-seeming.
I was eager for adults to talk to and trust.
In those days, so much was just never discussed,
could be likened to dreaming.
I was told I could stay as the toy shop was shutting
by a man we all knew as the kindest of sorts.
Decades on, I recall the descent of my shorts.
At the time, I said nothing.


And finally, on Saturday 4 July, I got to perform in Paisley (around the corner from where I used to write adverts and play a recurring comedy character on 96.3Qfm, or Q96 as most people remember it, when it was based in Lady Lane). I was competing at the inaugural Sma' Shot Bigshot Poetry Slam as part of Paisley's Sma' Shot Day celebrations (commemorating a milestone in industrial action and workers' solidarity). The slam was even mentioned in a motion to the Scottish Parliament. Chuffed. :)